Pillar Pages vs. Skyscrapers vs. 10x Content vs. Cornerstones: What’s the Difference? 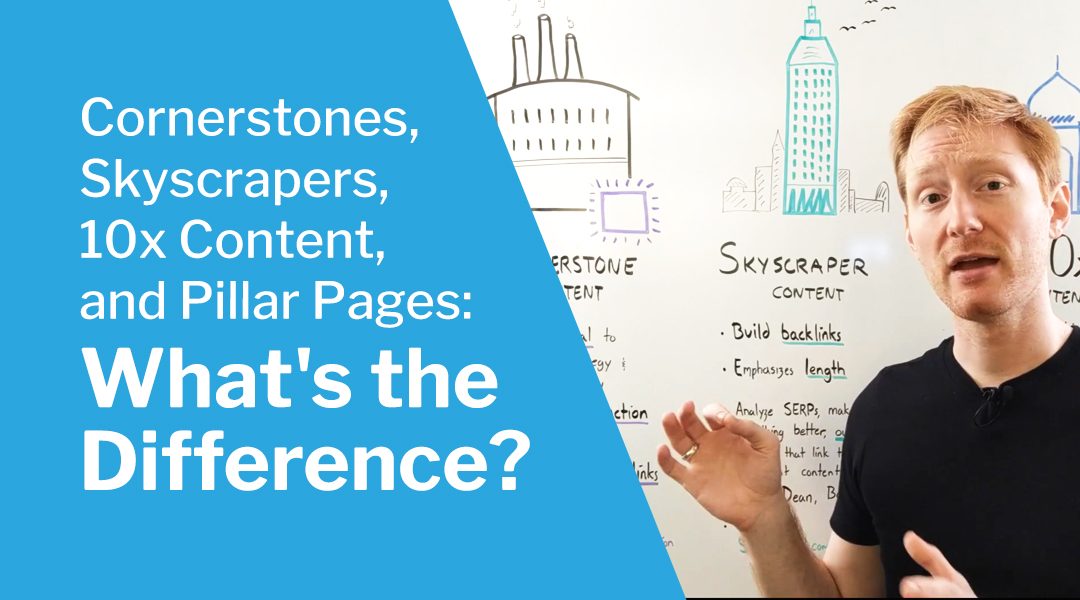 “In the world of branded marketing tactics, your metaphor either dies, or it lives long enough to be confused with the other surviving metaphors.” —Harvey Dent (probably)

One difficulty of working in marketing: the tactics change faster than the language around them. Influencers are always coining new terms to describe new tactics, and sometimes those terms overlap.

And that leaves marketers in a big bowl of terminology soup. Case in point: even newcomers to SEO know about the benefits of long-form content. But what do they call that content? Pillar pages? Skyscrapers? There’s a lot of vocabulary to wrap your mind around—and sometimes it helps to step back and see where it came from.

So, we made a video. =) You can read the transcript below. 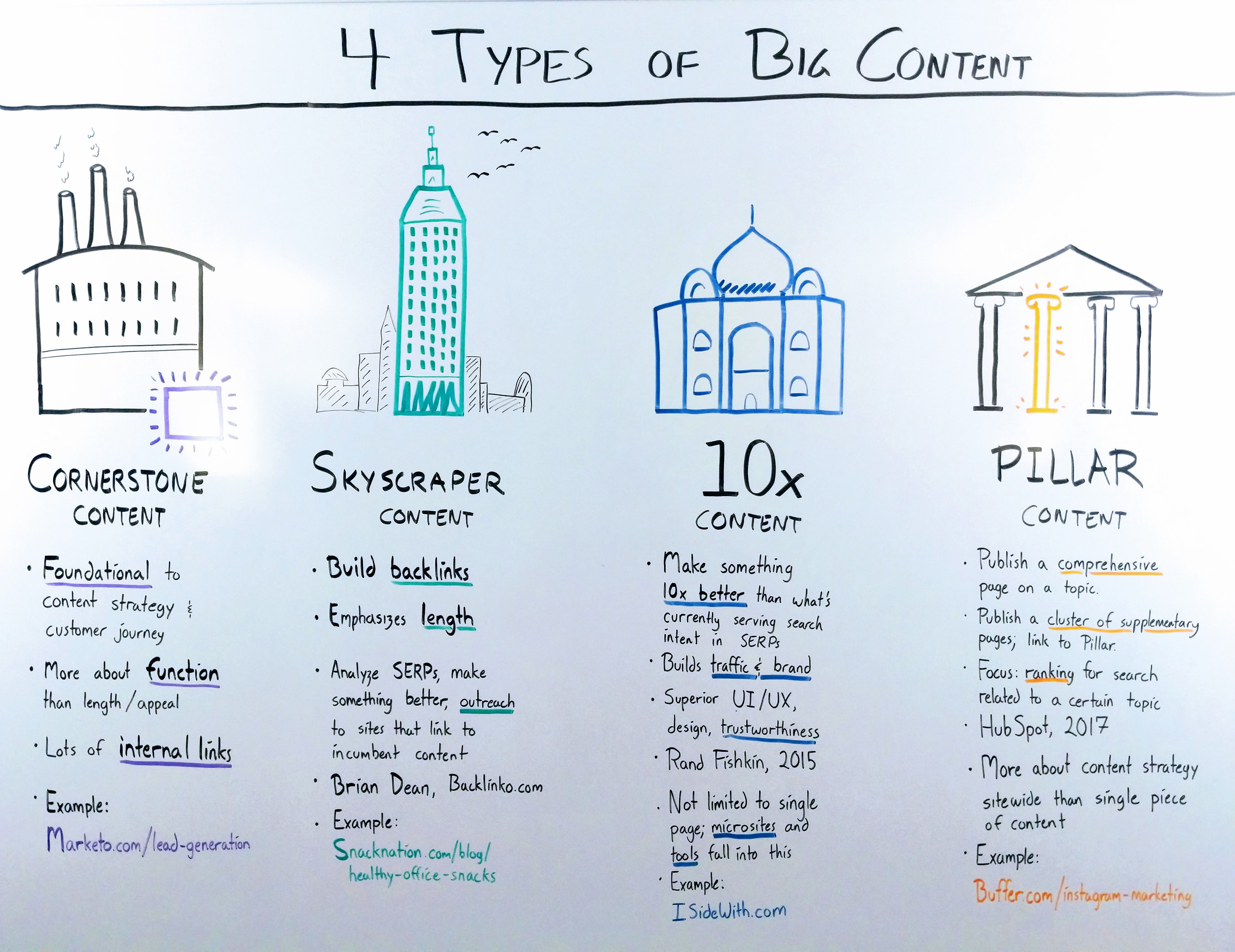 Now, cornerstone content has been around for a while in the content strategy world, and it comes from the way that people used to build structures. In the old days, if you wanted to build a building, you had to lay one piece of the foundation first, and that stone was placed at the corner. Then the rest of the structure was built out from around that, hence, “cornerstone.” It was the most important stone of the building—everything relied on that one piece.

That’s where we get the idea of cornerstone content from. It’s a foundational piece of content to your content strategy, and also to your customer’s journey. And here’s why. There are certain concepts that a customer needs to understand in order for them to do business with you.

For example, if you’re selling ice cream, it would be really important that the person that you’re talking to understand what a scoop is. What’s a cup? What’s a cone? Otherwise, that transaction would get really weird. You’re selling things that are more complex than ice cream, and so you’re going to need some content that makes sure people understand what that is and why it’s important.

Now, as you can imagine, there’s a lot of opportunity for internal linking with this content. And so you’ll be blogging about different things that you do, when you mention this foundational aspect of your business, that’s usually a spot where you would link to that piece of cornerstone content.

This was made popular by Brian Dean around 2014, when he said:

Have you ever walked by a really tall building and said to yourself:

“Wow, that’s amazing! I wonder how big the 8th tallest building in the world is.”

It’s human nature to be attracted to the best.

And he believed that the same goes for websites when they’re trying to build backlinks from other websites.

So he developed the skyscraper technique. It’s a link-building technique that content marketers use to get other websites pointing to their site. They do this by Googling a term that they want to rank for, analyzing everything that currently ranks for that term, and then writing something better, something more impressive. Or as Brian puts it:

Finding the tallest “skyscraper” in your space…and slapping 20 stories to the top of it.

Then they go to all the people that have already linked to the incumbent content, and ask them to link to theirs.

The idea is that if you truly wrote something that was better than what’s currently out there, then it should be easy to get those links. That’s great for SEO, and it works for a lot of people. 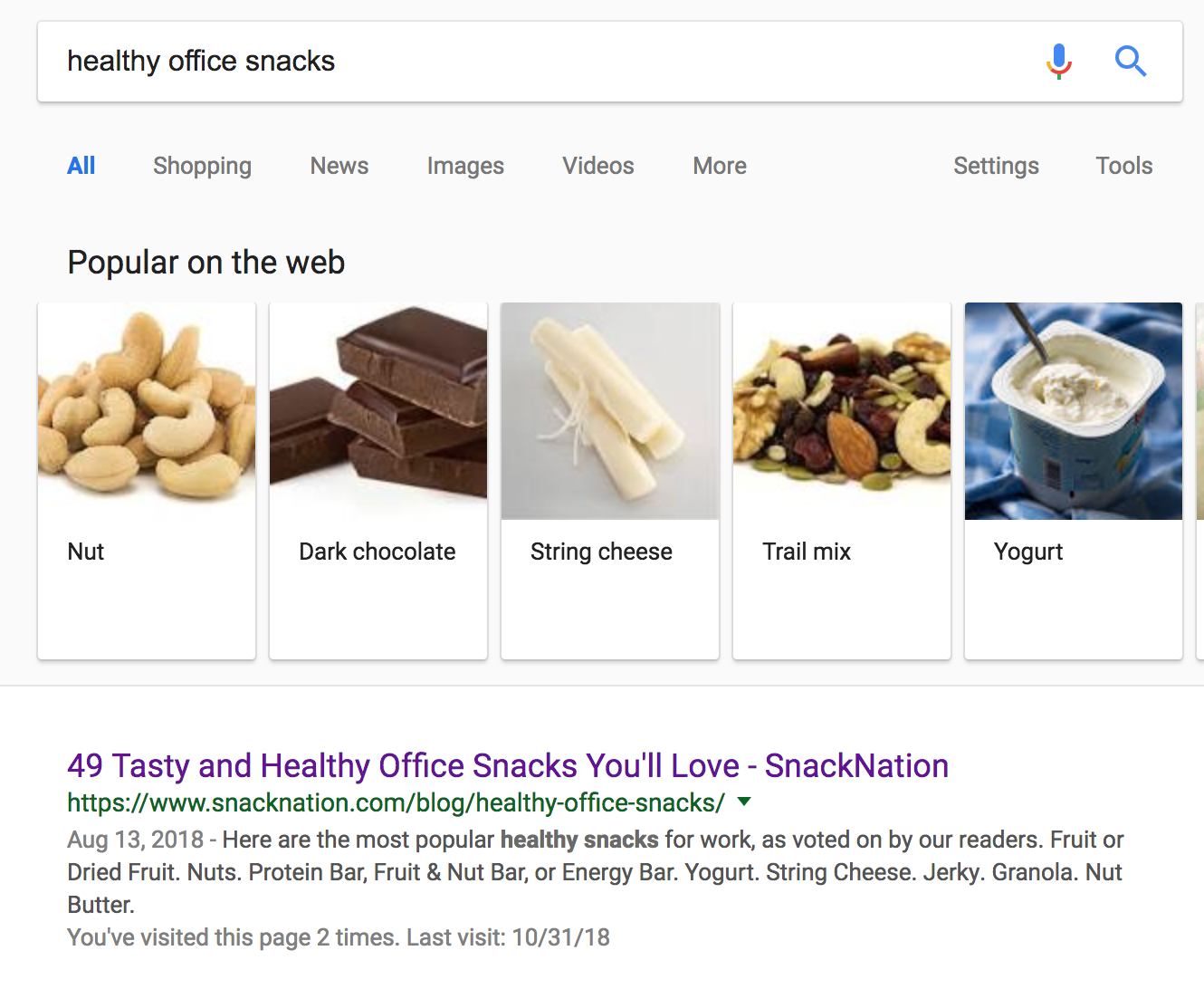 NOTE: The day I published this video, Brian Dean published his “Skyscraper 2.0” technique, a mod on the standard technique with emphasis on satisfying search intent.

This was made popular by Rand Fishkin in 2015, where he said that a lot of people are just trying to create unique content. Not necessarily remarkable content, just something that hasn’t been made before. And it’s really difficult to get a new, unique blog post to do anything for you—because there’s so much content that’s already out there.

So what Rand recommended doing, if you want to build traffic, links, and a great brand, is:

And for Rand, it goes beyond just length. He recommended investing in really good and impressive UI and UX, great design, trustworthiness. The idea is just make something so phenomenally good and so phenomenally helpful that your competitors would look at it and say, “There’s no way that we can compete with this, they’ve already sank so much time and effort into making this. We can’t go there.”

NOTE: Rand later made a Whiteboard Fridy video on exactly how to make 10x content yourself. Here’s the whiteboard snapshot below: 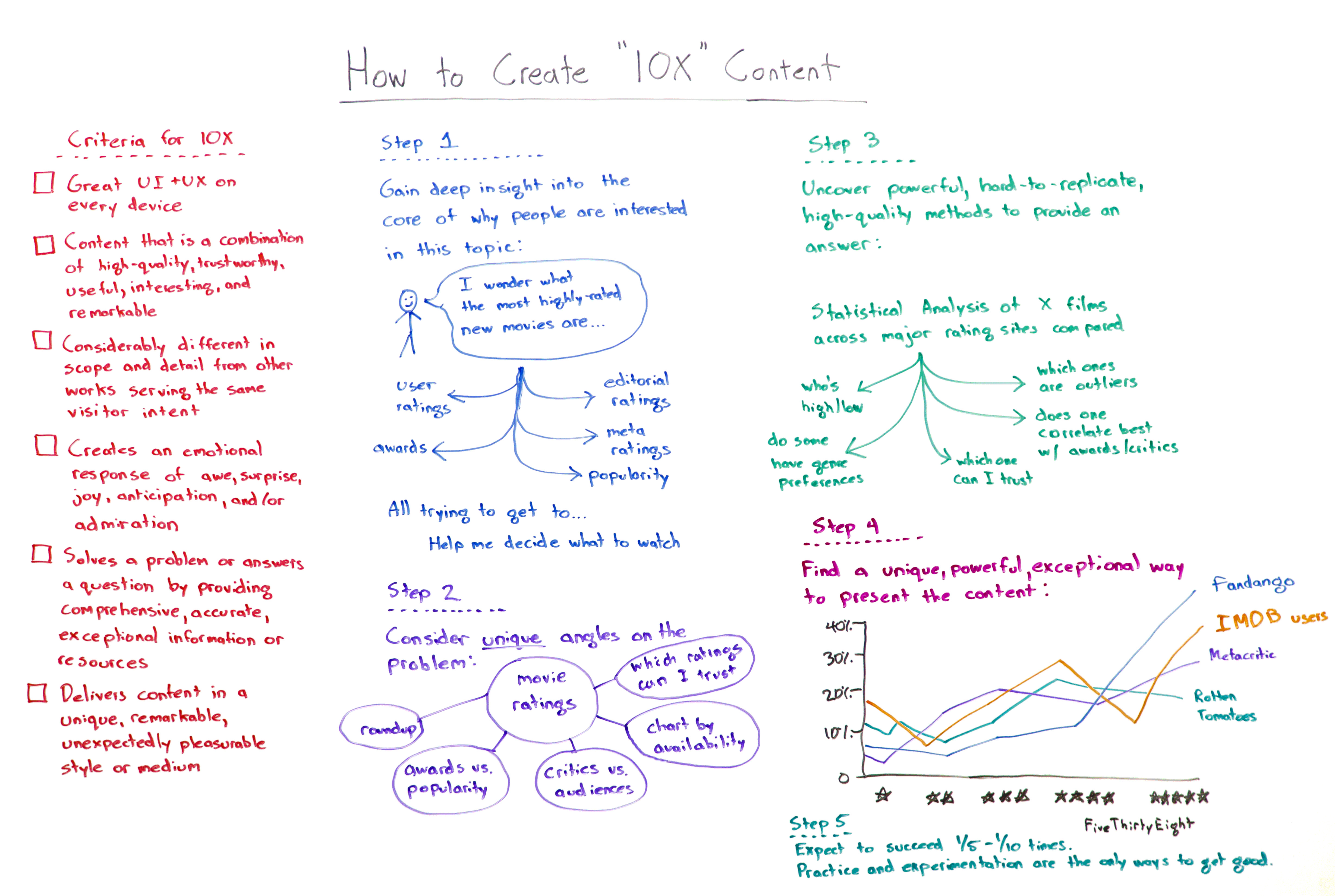 And so 10x content is very appealing to companies that like educating and impressing people. If you pull 10x content off really well, then you get a lot of links. It also builds your brand because people think of you as a brand that makes amazing things and helps them understand a certain concept very well.

An important note here is that, while cornerstone content and skyscraper content usually refer to just one piece of content at a time, 10x content does not. In fact, there are entire websites that have been labeled 10x content. (You can see Rand’s favorite examples here.)

A great example of this is isidewith.com. They allow you to take a quiz on various political issues, and then they show you how well you align with the political candidates that are running in a current election. And so that’s really helpful, it’s at least 10 times better than flipping through a voters’ pamphlet.

What are Pillar pages?

Now that brings us to pillar content. Pillar content became popular in 2017 when HubSpot started recommending a new approach to content strategy in light of SEO. Now, pillar content is built around the idea that you want to rank for searches within certain topics.

Similar to cornerstone content, where you want to make sure that people are getting educated on foundational elements of your business, pillar content says if we wanna educate people on certain topics, then there’s a smart way of doing this, and it’s by creating one page that is very, very comprehensive, almost like the encyclopedia entry on that topic, and then subsequently publishing a cluster of supplementary blog posts that look at very specific and detailed aspects of that topic, answering certain questions, interviewing influencers on the topic, that sort of stuff.

And then all of those supplementary pages would link back to the pillar page. It’s a great internal linking approach, and it’s a smart way to clean up your blog if you want to build more internal links and get more organic traffic. It works for a lot of people, it works for me, and it works for my clients.

The focus here is on ranking for specific searches within a topic, and it’s more about the content strategy of your site as a whole than it is in reference to just one piece of content. A pillar doesn’t stand alone, it is connected to supplementary articles, and usually you’re not just going to have one pillar page on your website.

There’s a lot of overlap here

Now, you’re probably picking up on the fact that these four terms are not mutually exclusive. In fact, there are pieces of content that fall into each of these categories, and do so very well.

So now you have an idea of what these four terms mean, how they’re different, and how they’re not mutually exclusive. You could cover multiple bases with one piece.

But it’s important, because if you’re forming a content strategy then you need to make sure that everyone on your team is on the same page, so that when you say, “I wanna make a piece of pillar content,” everyone knows, “Yeah, this piece of pillar content is gonna need some supplementary articles,” and they’re not thinking that all they have to do is write a skyscraper. That’s just one example of how knowing this can help you with your content strategy.