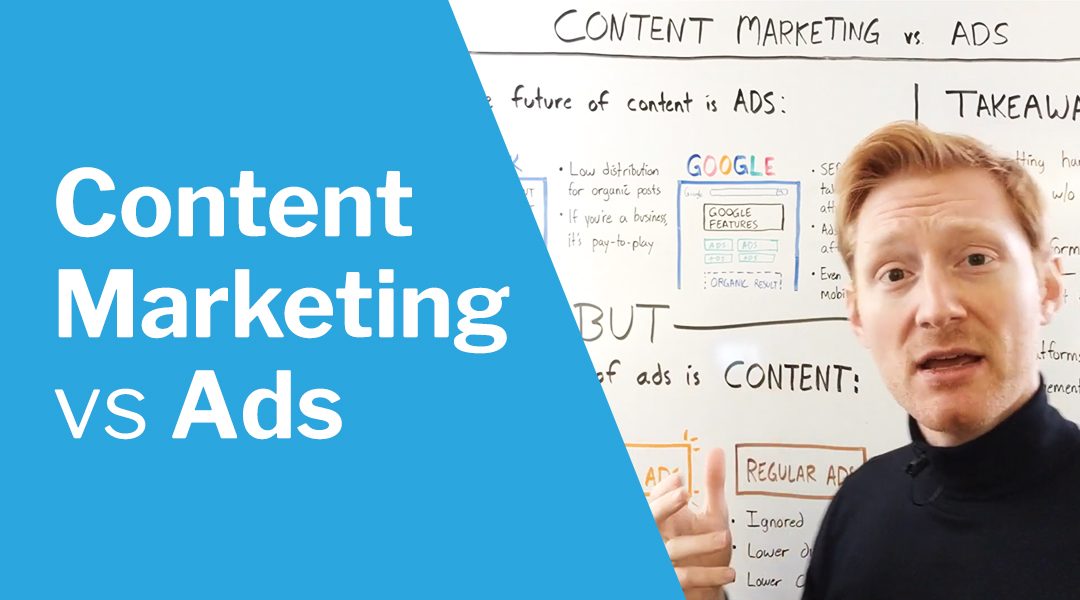 For the past decade, content marketers have enjoyed publishing stellar content and getting organic attention because of it. But the platforms that people use to find content are becoming more and more pay-to-play—and that means we content marketers need to change the way we think about content and ads.

Long story short: the future of content marketing is ads. Treating advertising like a content channel, not just a sales and conversion channel, is going to be essential to building brands in the years to come. 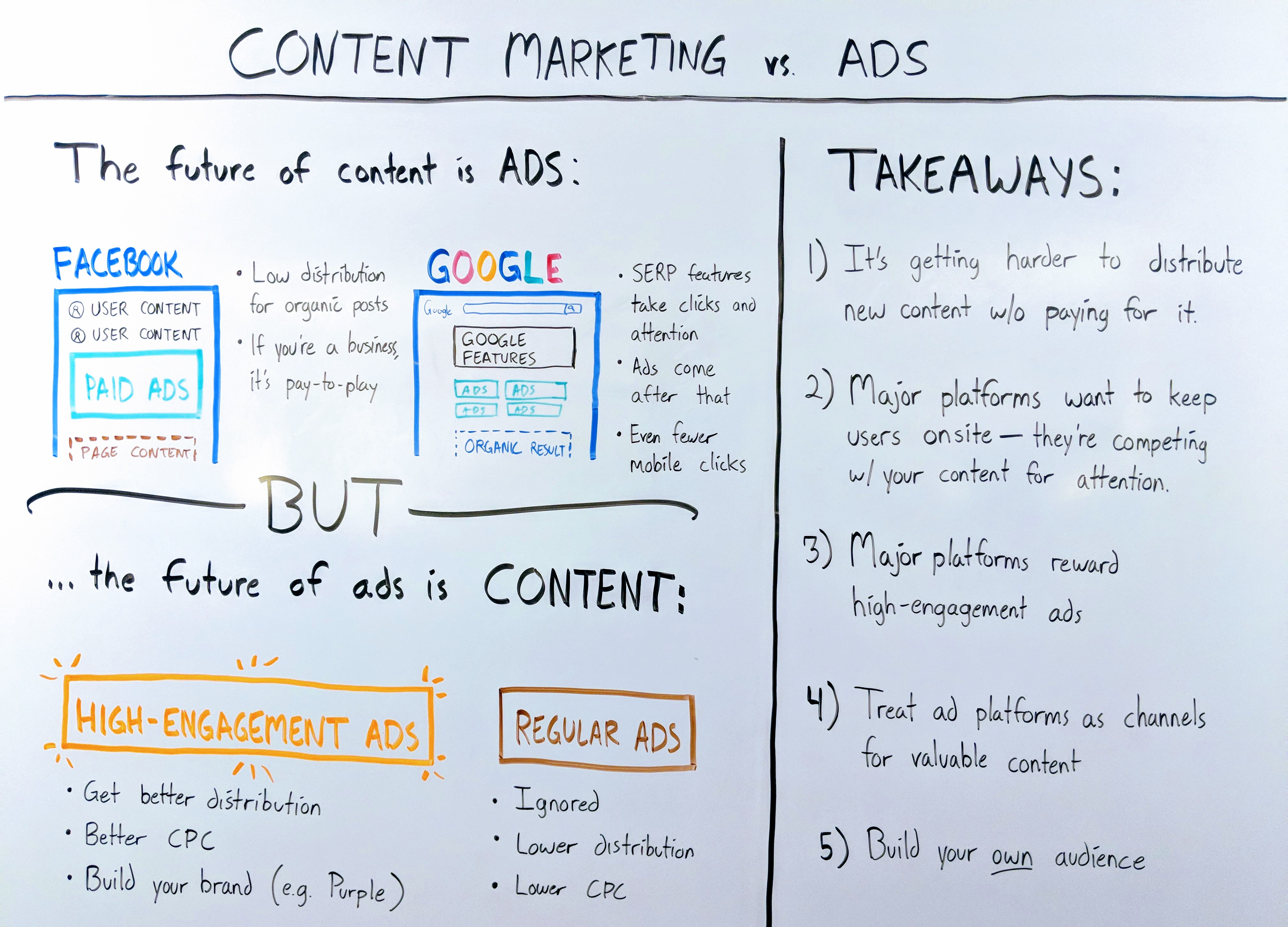 Traditionally, there’s been a bit of a rivalry between content people and advertising people when it comes to how to build audiences.

With content people, they tend to believe that if you make creative awesome content that’s very valuable, then the market will come to you. (Which is how content marketing works.) And it’ll spread either through people sharing it virally on social media, or via organic search. So you start seeing more and more people reaching your site from search engines like Google. That’s the general school of thought: make something amazing, and that will attract the audience.

Now the advertising people would take a different stance. They see the organic content approach as a little bit unpredictable so they instead just pay to reach the people that they want to reach. They create a system: put money in, get more money out. Pretty straightforward.

Why the rivalry needs to end:

That rivalry is probably not going to exist on very smart marketing teams in the future, because the platforms on which content is distributed are changing. In the old days, it behooved Google and Facebook and other platforms to promote really awesome content. That’s because it gave people a reason to be on those platforms: they were discovering more great stuff.

But now, these large platforms really don’t want to send their user base somewhere else. That’s why you see Facebook, and LinkedIn, and other social networks not giving the same sort of distribution to posts that have links to other sites in them. There’s more of a preference for native content.

We’re seeing the content distribution channels that we’ve grown use to using as content marketers shifting. Because they’re shifting, we need to shift the way we think about content and ads. I believe the future of content is ads, but the future of ads is content. Here’s why. 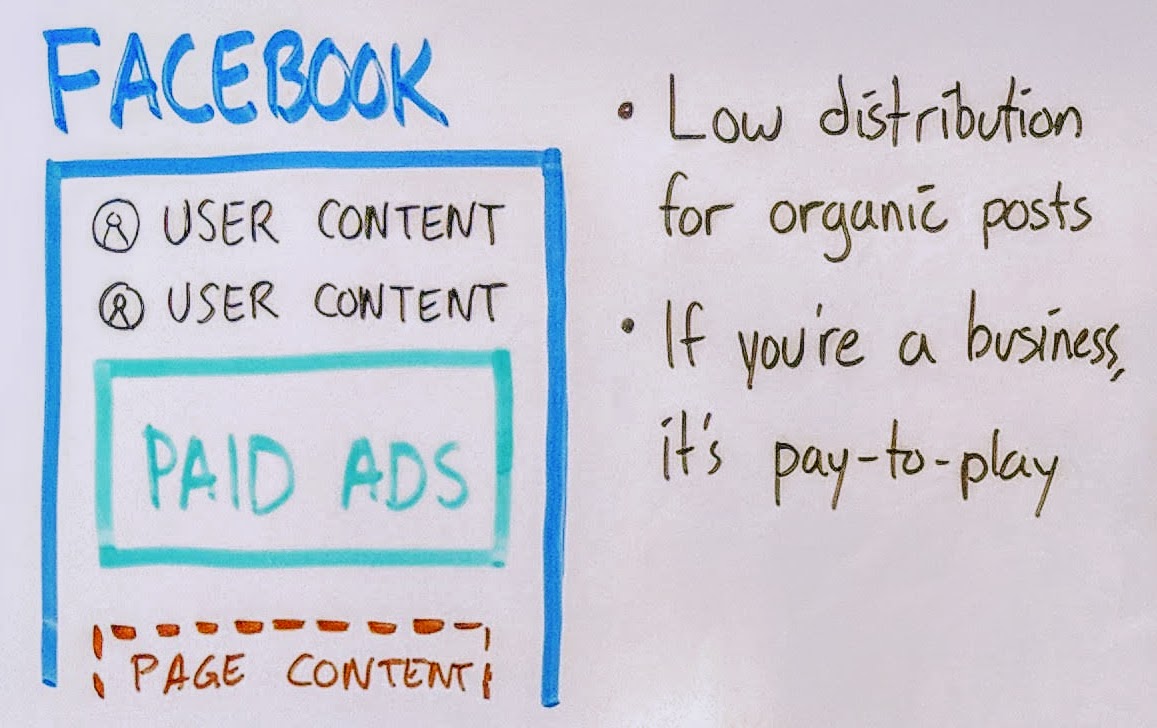 If we look at how advertising and content are working on the major platforms today, then we’re going to see some interesting things. For example, Facebook gives low distribution to organic posts from businesses. Basically, if you’re a business and you are on Facebook it’s pay-to-play.

Why? Because Facebook exists to get users to stay on Facebook. They want to connect people, and so most users are just going to see user content, stuff that their family or friends posted. 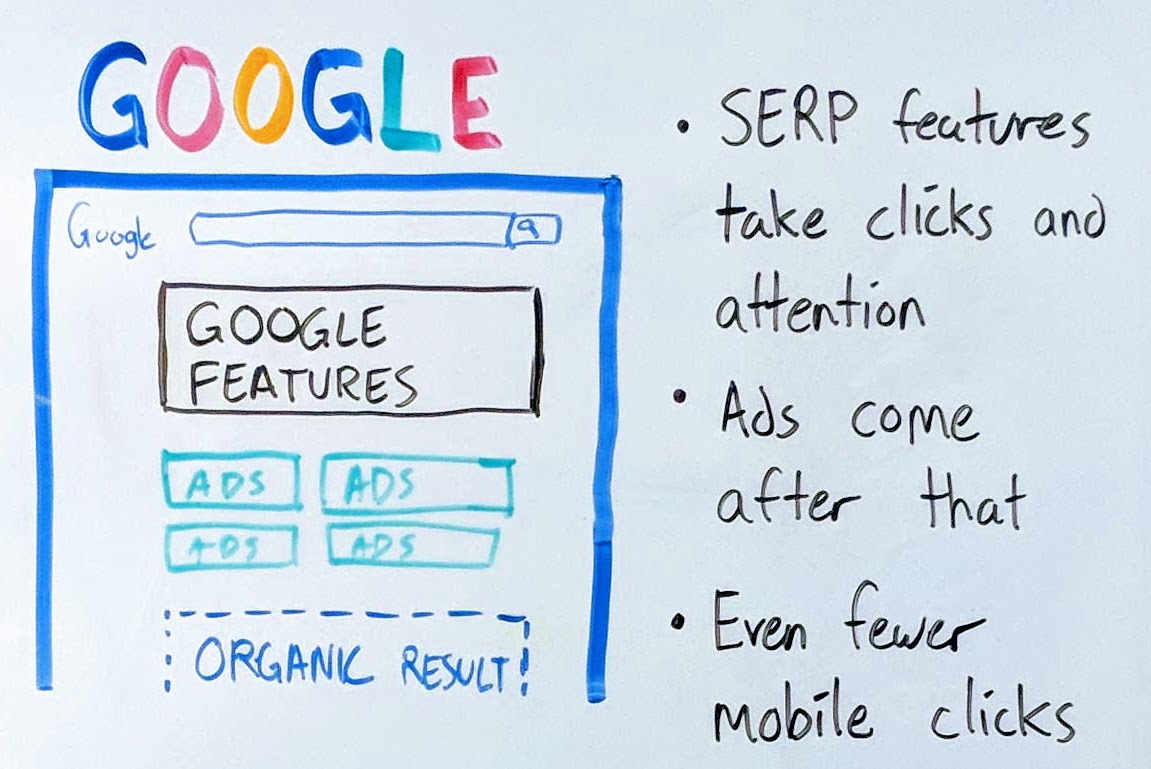 Now with Google, we see something similar. Whereas in the old days you Googled something and then you would see a list of blue links (organic, unpaid search results). Now, we see featured snippets and different Google SERP features, which is essentially Google saying, “We have the answer ourself. You don’t need to go to any other website to get the answer. We’ll just give it to you right in the search results page.” And then we have ads, and then we start getting into the organic content.

Note: If you’d like to know how to get your business’ content in those organic search results, I recommend you read our beginner’s guide to B2B SEO.

Now people are still clicking on organic results in Google, so it’s not like you can’t get any traffic from Google. But we are seeing this shift happening, clicks are going down on both desktop and mobile, especially mobile. About one in every three mobile searches gets any sort of click through.

Keep in mind, Google and Facebook want to keep their users on their platform. It’s not necessarily in their best interest to send them to your site, which is why they want you to pay them to send them away.

I say the future of content is ads, because when we look at the major platforms we see that it is getting harder for new content to be distributed without paying for it. If you make a great piece of content, even if it’s amazing and better than everything else out there, you’re probably going to have a hard time getting eyeballs on it, at least at first, if you don’t pay for it.

If you’re going to be making content, you’re probably going to need to advertise in order to get anyone to see it.

But, it doesn’t stop there because while the future of content is ads, I believe that the future of ads is content. And here’s what I mean.

These major platforms aren’t just saying, “Well, all ads are created equal.” Because they’re not. We’ve all seen great ads, and we’ve all seen crappy ads. Because these platforms want to keep users engaged, they reward ads that get more engagement. If Google users are more satisfied with certain Google ads, then those ads get better treatment. Those are ads that Google wants to serve up to more of their users. They get better cost per click rates. They get more distribution.

And if you make a really engaging ad, you can also build your brand. Perhaps the most prominent example of this right now is Purple, the online mattress company. They make highly entertaining ads that present their product in a way that is really engaging for people. Crappy ads on the other hand, tend to get ignored and because they’re ignored it costs more to get a click, and these platforms aren’t as likely to distribute them.

So, good thing for you to know. If you’re making content, spend money on ads. But when you’re making ads, those ads need to be valuable. They need to be high-engagement, because you’re competing against everyone else doing ads.

Because if we treat ad platforms as channels for valuable content, then we’re going to be getting those rewards of high-engagement ads. We’re going to get more eyeballs on our material, and we’ll be able to build our own brand and our own audience, which is really key. You can see that these major platforms are able to make these calls because they built these enormous audiences, and we’re paying to access them.

So if we’re paying to access them, then we should be crafting our content and our ads in such a way that we’re creating demand for our brand. We want people to want to hear more from us, and we can do that by making very high value advertising content when we’re promoting our stuff.

So pay to play, but play to win.