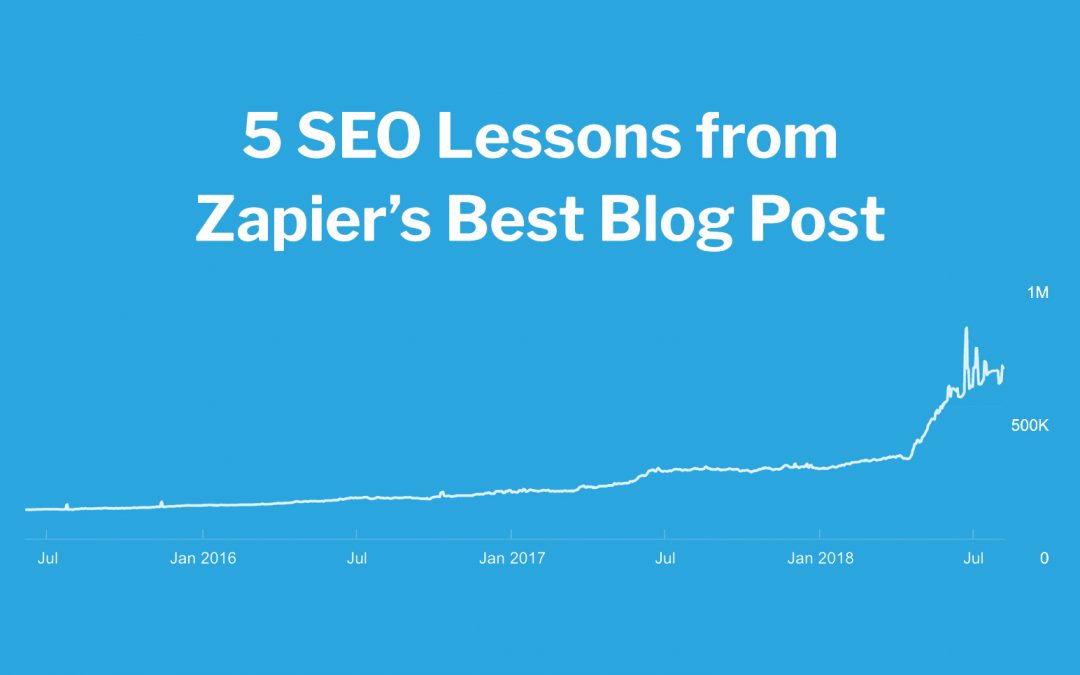 If you’ve done much content marketing in the SaaS world, you’ve probably spent some time on the Zapier blog. Zapier is a tech company that helps people integrate various tools—even if they’re not developers. Zapiers gets apps like Google Sheets, Box, and Salesforce to automatically talk to each other, which saves humans a lot of dirty work. Their solutions are a huge productivity boost to the digital workspace.

But so is their blog, which they use to address challenges facing marketers today.  It shows in the content they produce—they’ve been a resource to the tech community for a long time, and continue to produce practical guides on staying productive in the digital age.

The blogging’s paying off for them, too. As of July 2018, the Zapier blog gets more than 630,000 organic visits every month. You’d have to spend about $1.5 million every month to get their traffic using PPC ads. And like a Bing Crosby–enhanced snowstorm, this growth shows no signs of stopping. According to Ahrefs, their organic traffic has doubled in the last six months:

They’re publishing a lot of quality content. And when I say “a lot,” I mean “a LOT.” They’re on a near-daily publishing cadence—in July 2018, they published a whopping 26 posts.

So we wondered, what’s Zapier’s #1 organic post, and what can we learn from it?

In March 2018, Google announced that they were phasing out their popular URL shortener tool, Goo.gl. This tool helped folks shorten long, unwieldy links into smaller URLs—which really came in handy for business cards, event collateral, and the like. This product retirement posed a problem to the people using Google’s tool: how were they going to shorten their links now?

A lot of the people who would miss Google’s tool are scrappy marketers and small business owners—the very kinds of people that Zapier serves.

So in April 2018, Jill Duffy published a guide to the best five alternative link shorteners.

Duffy presents five alternative URL shortening tools (including Zapier’s), along with some reasons why a reader might choose one over the others.

Just a few months later, this post is situated near the top of some very high-volume keywords. It pulls in about 200,000 organic visits per month, which accounts for about 35% of the blog’s overall traffic from organic search. It ranks for almost 6,000 individual search queries, and its organic traffic would cost about $159,000 a month if you were to buy it via PPC ads.

It’s a standout post on the blog. Let’s see what we can learn from it.

1. They recognized a new problem right away

When Google announced that they were discontinuing their link shortener, tens of thousands of people who relied on them immediately wondered, “What will we use instead?”

Link shorteners are nothing new: they’ve been in use for a long time and there’s hardly anything newsworthy about them. But when Google announced that they were sunsetting Goo.gl, people started searching for alternatives. It was a prime opportunity for Zapier: they have a link shortener, and a large group of people were finding themselves in need of a new one.

Zapier moved quickly—this post was up within a few weeks of Google’s announcement. Not only did they have some good news for the people wondering what they would use instead, but they also had a resource that anyone else reporting on the change could link to.

2. It’s a win for the reader, even if they don’t use Zapier

Rather than give the reader a long spiel about how Zapier’s URL shortener is the best alternative, Duffy gives the reader a comprehensive understanding of their options—and why they might choose one. This sets Zapier up to make an even better product pitch at the end. Instead of a long sales page, the right readers (the ones looking for the kinds of solutions that Zapier provides) are drawn to using Zapier based on what Zapier is for.

Zapier mentions the big players in the link-shortening space: including Bitly and TinyURL. Some content marketers have a hard time mentioning competing brands on their own blog—partially out of fear of giving competitors free marketing, or diluting their own marketing ROI.

However, from an SEO standpoint, mentioning competitors is working in Zapier’s favor here. This post ranks for branded terms, including “tiny url,” and “bitly shortener.” By expanding the scope of link shorteners in this article, Duffy also expanded the scope of queries that this article could rank for.

If you’re searching for a link shortener, and especially if you want an alternative to Goo.gl, you’re going to love this post. It has a brief intro, followed by a table of contents that sets up the five options in the post with jumplinks. 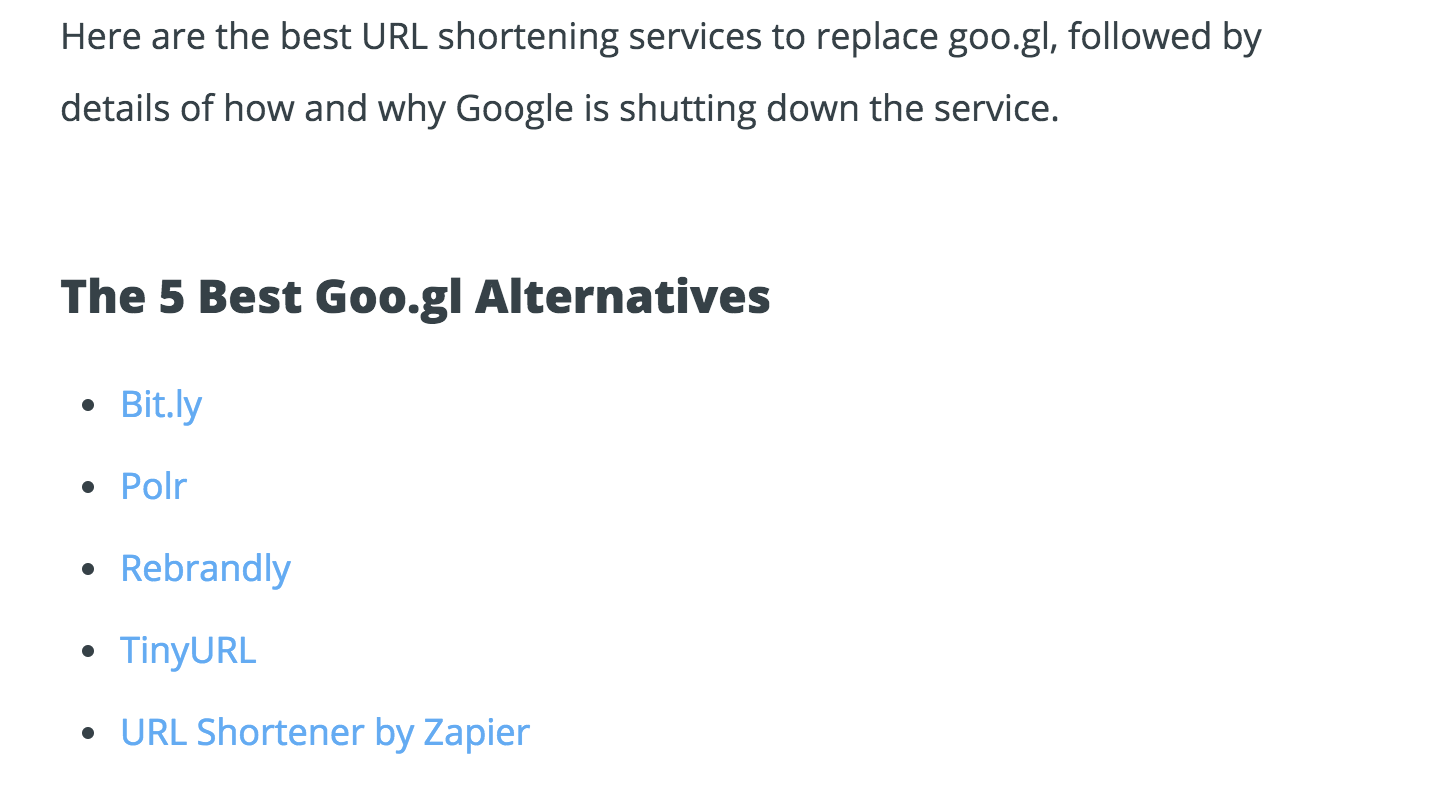 It’s a kind way to treat your readers: let them jump to the sections of the post that are most interesting to them, and bypass the stuff that’s not.

“News-hack” is a content marketing term that refers to just about any piece of content developed in response to a piece of news. The idea is to “hack” the newsworthiness of a given topic by writing about it from your brand’s perspective.

News-hacks can be effective ways of gaining attention, and they can even earn links if done well, but their timely nature often gives them an inherent shelf life. After all, there are only so many times a breaking news story will be relevant. People are going to move on.

But this post is a rare example of an evergreen news-hack: the Zapier team shipped a post taking advantage of Google’s changes, but it’s full of content that will be useful for years to come. The post was newsworthy when it came out, but it’s going to be valuable for a long, long time.

There’s an important takeaway for content marketers here: if you’re going to take advantage of news in your industry, try to link that effort to something that will be valuable long-term.

This post is a recent win for Zapier—partly due to the news that Google’s shutting down their link shortener. But there are a few ways Zapier can position this post for more long-term success:

All in all, it’s an example of a great post. Making these adjustments might give it even more lift—and staying power.

This post is a fantastic example of a software company recognizing ways that they can serve their audience, weigh in on industry news, and promote their product at the same time.

Zapier stayed atop industry news, and they already defaulted toward solving problems for their audience. This blog post allowed them to solve a new problem their audience faced, and collect a great deal of organic traffic as well.

You can do the same. Keep an eye on the problems your audience faces, and be ready to help them solve those problems.

Both of you will be glad you did.